Z/X Ignition is the anime adaptation of Z/X -Zillions of enemy X- TCG. It was first aired in Japan between January 2014 to April 2014. It is also streamed by Crunchyroll outside of Japan.

The story is a loose adaptation of Z/X main story and follows Asuka Tennoji as the main protagonist.

The story is set in the near future. Gateway to parallel worlds called Black Point suddenly appeared around the world. Immediately after, strange creatures called "Z/X" appears from these gates and start invading the humanity. Since then, Z/X and mankind began their violent struggle.[1]

Several years later, the war is currently in a state of lull, and a moment of peace comes to the earth. Meanwhile, Asuka Tennoji is an ordinary high school student living in Kobe, Japan, but his fate starts to greatly change when he meets a mysterious girl on the corner of the street and and receives a "Card Device" from her.[1]

Each Z/X Ignition episodes are called "PHASE", with the twelfth and last episode is appropriately called "END PHASE".

The opening theme for the anime is "EX:FUTURIZE" by Yōko Hikasa while the ending theme is "Monochrome Overdrive" (モノクロームオーバードライブ Monokurōmu Ōbādoraibu) by Yurika Endō. 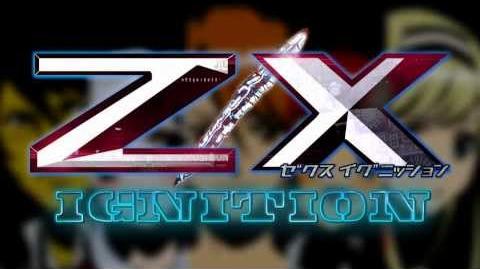