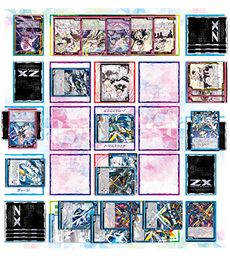 Z/X (pronounced as Zeks) is a one-on-one trading card game created by Broccoli and Nippon Ichi Software where the players fight against each other on 3×3 squares battlefield using different combination of offensive and defensive strategy based on 5 different worlds.

In Z/X, the first player who make their opponent loses all 4 of their life wins.

You need a deck in order to play Z/X.

The following rules must be followed when constructing a deck.

The state of a card is represented by the public "face-up" state and non-public "face-down" state, and also the vertical (not in-action) "Reboot" State and horizontal (in-action) "Sleep" State.

Resolve step 1 to 6 in sequential order. Afterwards, proceed to the opponent's turn.

All your cards in "Sleep" State (horizontal position) are "Reboot" (switch to vertical position).

Draw 2 cards from your deck. However, the player who goes first cannot draw during their first turn.

You may choose a card from your hand, then put it into "Resource" in "Reboot" State. You may choose to not put any card. During each Resource Phase, only 1 card may be put into Resource this way. Cards put in "Resource" are used to pay the Cost required to use a card.

You may perform "Ignition" (IG). "Ignition" is performed in the following order.

You can perform "Ignition" as many times as you want as long as you have enough cards in "Charge".

The following action can be done in any order, and as many times as you want. Please refer to "Paying the Cost" section for more details about Cost. You can only perform either "Play a Z/X Extra" and "Play an Event Extra" once per turn.

Perform the following procedures during the End Phase. 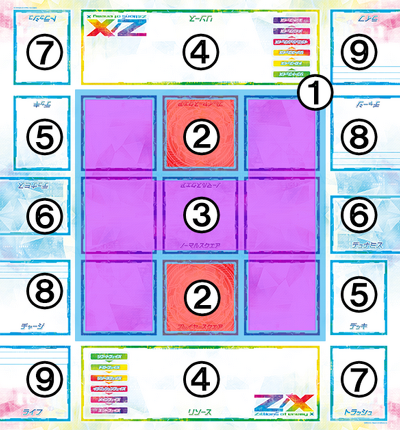 The act of using a card is known as "play".

In order to play a card, you need to pay the Cost written on that card. Cost is paid by turning a number of cards in your Resource, equal to the Cost of card that you want to play, from "Reboot" State into "Sleep" State. Also, you must "Sleep" at least one card with the same color as the card you want to play.

When playing a "Z/X" or "Z/X Extra" card and put them onto a "Square" in "Reboot" State, you must follow the following rules. 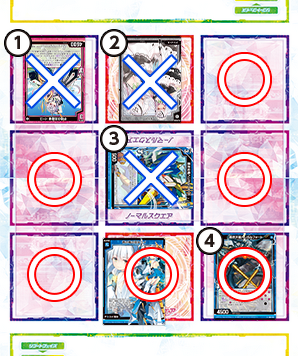 Proceed the battle by performing the 4 steps below in sequential order. 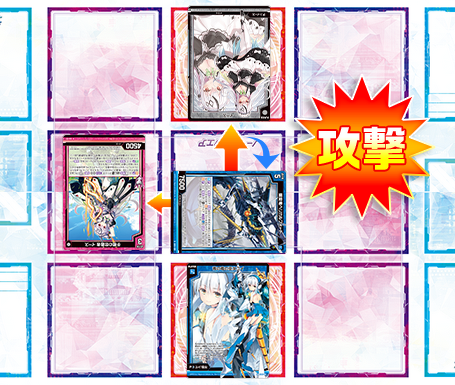 Declare an attack using your Z/X in "Reboot" State by turning that Z/X from "Reboot" State to "Sleep" State. The attacking Z/X may attack an opponent's Z/X or opposing "Player" adjacent to it. However, you cannot attack the "Player" if your opponent has a Z/X on their "Player Square". 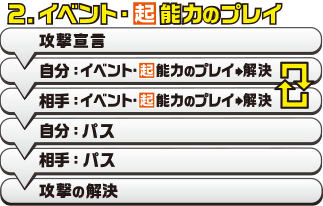 The order are alternating between You → Opponent → You to choose whether to play Event, [Boot] ability, or to pass. The effect of the card and/or ability are immediately resolved after used. If both you and your opponent choose to pass, proceed to step [3].

A. Attacking a Z/X 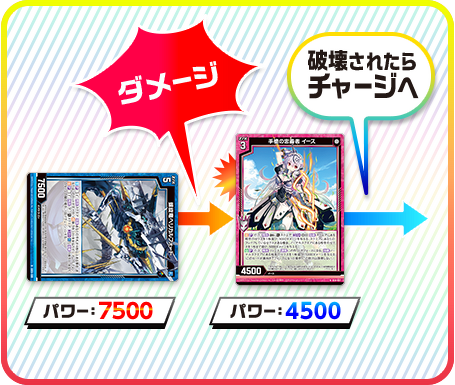 Deal damage equal to your attacking Z/X "Power" to your opponent's Z/X. The damage is only dealt from the attacking Z/X, and the opposing Z/X doesn't deal any damage. Z/X that has received damage equal to or greater than its "Power" are destroyed and put into "Charge".

B. Attacking a Player 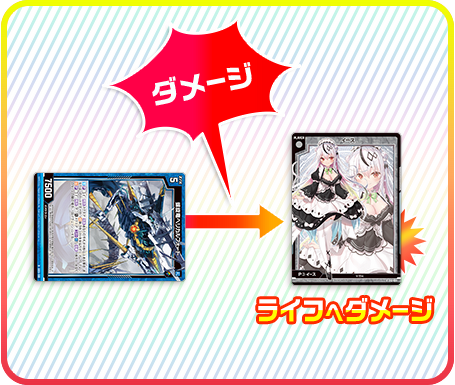 When You Deck Out

When a player deck count reaches 0, that player immediately shuffle all cards in their "Trash" and use it as a new deck. Afterwards, the opponent of that player choose a card from that player's "Life" and put it into that player's "Charge". That player loses if their Life is reduced to 0 during the process.

If a card with Ignition Icon is put into "Charge" at this time, that card cannot be played. Moreover, effects or abilities like Life Recovery or Void Bringer are not activated either.

You can construct an additional deck called "Dynamis" separately from your main deck.

You can play a Z/X Extra by fulfilling either one of the following conditions.

You can play a Z/X Extra with "Advent Condition" by fulfilling the following conditions.

Steps Until Z/X Extra with "Advent Condition" Appears on Square

You can play a Z/X Extra with "Awaken Condition" by fulfilling the following conditions in sequential order.

Steps Until Z/X Extra with "Awaken Condition" Appears on Square

You can play a Z/X Extra with "Idealize Condition" by fulfilling the following conditions.

Steps Until Z/X Extra with "Idealize Condition" Appears on Square

If a Z/X Extra that appeared on Square left the "Square" and would be put into another location, that Z/X Extra card is immediately put into "Dynamis" in face-up position.

Face-down Z/X Extra in your "Dynamis" can be played during the Main Phase of your own turn.

3. About Ignition Overboost and Shift

Introduced in "Code:Engage" storyline, "Ignition Overboost" is a mechanic that allow a Player and Z/X to fuse as one into "Z/X Overboost" card, while "Shift" is a card that allow a Z/X or Z/X Overboost to lend the form of Player of figures from both past and future.

Please refer to the linked pages above for more details about the mechanic and the card types.

4. About Idealize and Event Extra

Introduced in "Code:Dreamworld" storyline, "Idealize" is a mechanic that utilized Counter as well as "Idea Drive" special moves from Partner Z/X that appeared as "Event Extra" cards.

Please refer to the linked pages above for more details about the mechanic and the card types.

Introduced in "Code:Eldersign" storyline, "Alter Break" is a mechanic to overcome "Alter", the manifestation of figure from the bad end of a Z/X.

Please refer to the linked page above for more details about the mechanic.

Introduced in "Code:MagicaPrincess" storyline, "Crisis Arc" is a system to aid in building multicolored deck, by adding the multicolored "Arc Z/X" in to the deck to expand the deckbuilding options.

The ability of a card may create a Marker. Among Marker created by card's ability, "Token" and "Counter" make use of dedicated Marker.

Dedicated Marker can be obtained by the following methods. (The methods are subject to change)

Token Marker and Counter Market obtained by any methods other than the above cannot be used.

Marker that are different from the created Marker cannot be used.

Although Token is not a card, it is put as a card when appears on Square and possess the specified card type.

If the type of a Token is Z/X or Z/X Extra, it possess parameters such as Cost, Power, color, card name, Tribe, ability, and so on.

The following are examples of how a Token that appeared on Square would disappear.

If a Counter is created by a card's ability, the type and amount of the created Counter are represented by dedicated Counter Marker. Counter possessed the Icon parameter.

Each player tracks the amount of Counter in their possession. This is treated as the Counter created by that player. Each player has 0 Counter at the start of the game.