Each pack contain 7 cards and each box contain 10 packs. There are 40 cards in total + 40 holographic cards, excluding special cards. 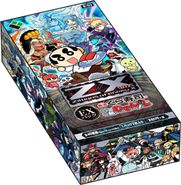 Box
Add a photo to this gallery

Player Cards
Add a photo to this gallery

The following Free Card Deck were distributed as a trial edition of the booster.

Retrieved from "https://zxtcg.fandom.com/wiki/Extra_Pack_3:_Kaiten_Mutenmaru?oldid=83160"
Community content is available under CC-BY-SA unless otherwise noted.