Code:Dingir - Encounter with Dynamis ( との Kōdo Dingiru Dyunamisu to no Kaikō, the base Kanji for "Code:Dingir" and "Dynamis" literally means "Chapter True God Advent" and "Sacred Area" respectively) is the sixteenth Z/X -Zillions of enemy X- TCG set and the first set in the Code:Dingir storyline.

Each packs contain 7 cards and each boxes contain 20 packs. There are 100 cards in total + 100 holographic cards, excluding special cards. 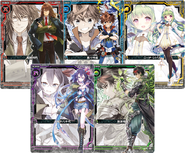 The following Free Card Deck were distributed as a trial edition of the booster. Player is able to play with the new system and new character with this deck.

This set is accompanied by the following short stories.