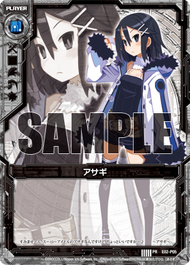 In Z/X -Zillions of enemy X- TCG, there are several cards with "Asagi" in its card name, with the majority of them also have "Asagi" (アサギ) listed as its tribe. The first of them were "Permanent Hidden Character, Asagi" from Set 3, which is quickly followed by the promotional cards from Z/X - Crusade of the Absolute Boundary and many more from NIS Extra Pack and its sequel.

Asagi cards are mostly Blue with various kind of abilities. Some (if not most) of her cards also makes fun of her longtime desire to become a protagonist on her own game.

Cards with [Asagi] as its tribe

Other cards with "Asagi" in its card name

Retrieved from "https://zxtcg.fandom.com/wiki/Asagi?oldid=78492"
Community content is available under CC-BY-SA unless otherwise noted.